Some people might hear words like ‘telecommunications’, ‘SMS marketing’, and ’short code’ and feel baffled or bored. ‘This is the world of techies and entrepreneurs!’ they may protest. But they’d be wrong.

SMS marketing is becoming increasingly fashionable, not just in terms of its far-reaching desirability to companies across innumerable fields, but in its employment to disseminate brand new, exclusive fashion.

That’s because the mobile number was not made obviously available to the general public, but rather tucked away in a promotional video for the collection, named Season 2. The video showed bike messengers pedalling the new garments, hanging posters advertising the collection and delivering packages. The story continues as they journey through New York City, and stop off at a rave before heading home to bed. The mobile phone number was sneakily hidden on the posters which appeared in brief flashes earlier in the video.

It is an apt promotional campaign for a collection which ‘fuses two disparate experiences — raving and cycling — to present the story of a tribe of New York bike messengers’, according to both Adidas Originals and Alexander Wang. 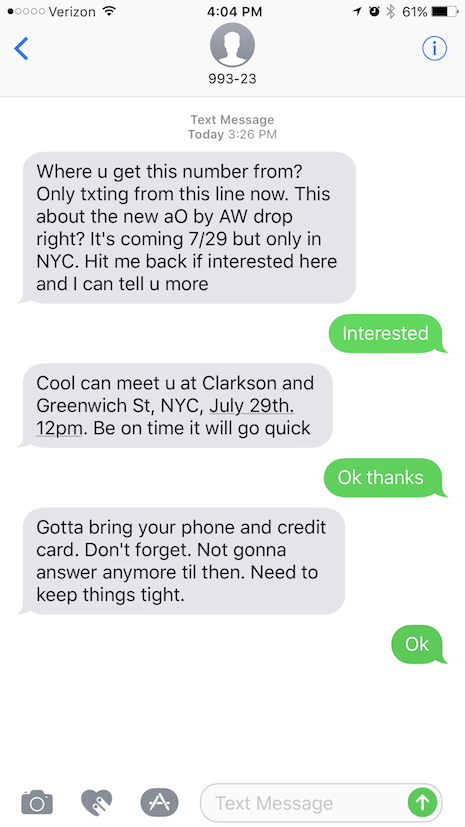 The idea of quietly revealing the necessary communication channel via posters was brought to life with actual posters which sprang up around the city, bearing the number which would-be buyers could text for information on how to get hold of the new clothes and trainers.

People who texted the number would receive replies filled not with the usual formal messages or uncomfortably convoluted, emoji-ridden slang some companies use, but with sharp, blunt, casually-typed responses which felt reasonably as if they had been composed by a real New Yorker supplying bootlegged goods.

The impactful ‘TEXT TO BUY’ campaign can be seen on Alexander Wang’s official Instagram page, and if you want to peruse the entire collection, head to the website.

This campaign aptly illustrates the power of SMS campaigns to both (and even simultaneously) create an impression of absolute exclusivity and personal, direct communication, and reach millions of people instantaneously. Moreover, you clearly do not need to sacrifice your brand’s personality and send out corporate-feeling or try-hard texts – you can remain aloof, cool, mysterious, or whatever your company is trying to project.

There are few businesses which could not make excellent use of SMS campaigns to reach their existing or potential customers, so make sure you give this direct channel of communication the consideration it so clearly deserves. As ever, we must follow fashion’s shrewd and effectual example.

To see if it’s right for you, check out the bulk SMS delivery offered by Nexbridge.